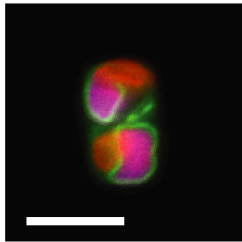 Diatom cell walls, called frustules, are main sources of biogenic silica in the ocean and their intricate morphology is an inspiration for nanoengineering. Here we show dynamic aspects of frustule biosynthesis involving acidification of the silica deposition vesicle (SDV) by V-type H+ ATPase (VHA).

In exponentially growing cultures, VHAB-eGFP was present in various subcellular localiza- tions including the cytoplasm, SDVs and vacuoles. We studied the role of VHA during frustule biosynthesis in synchronized cell cultures of T. pseudonana. During the making of new biosil- ica components, VHAB-eGFP first localized in the girdle band SDVs, and subsequently in valve SDVs. In single cell time-lapse imaging experiments, VHAB-eGFP localization in SDVs pre- cluded accumulation of the acidotropic silica biomineralization marker PDMPO. Furthermore, pharmacological VHA inhibition prevented PDMPO accumulation in the SDV, frustule biosyn- thesis and cell division, as well as insertion of the silicalemma-associated protein SAP1 into the SDVs. Finally, partial inhibition of VHA activity affected the nanoscale morphology of the valve.

Altogether, these results indicate that VHA is essential for frustule biosynthesis by acidifying the SDVs and regulating the insertion of other structural proteins into the SDV.

We use cookies to ensure that we give you the best experience on our website. If you continue to use this site we will assume that you are happy with it.Ok