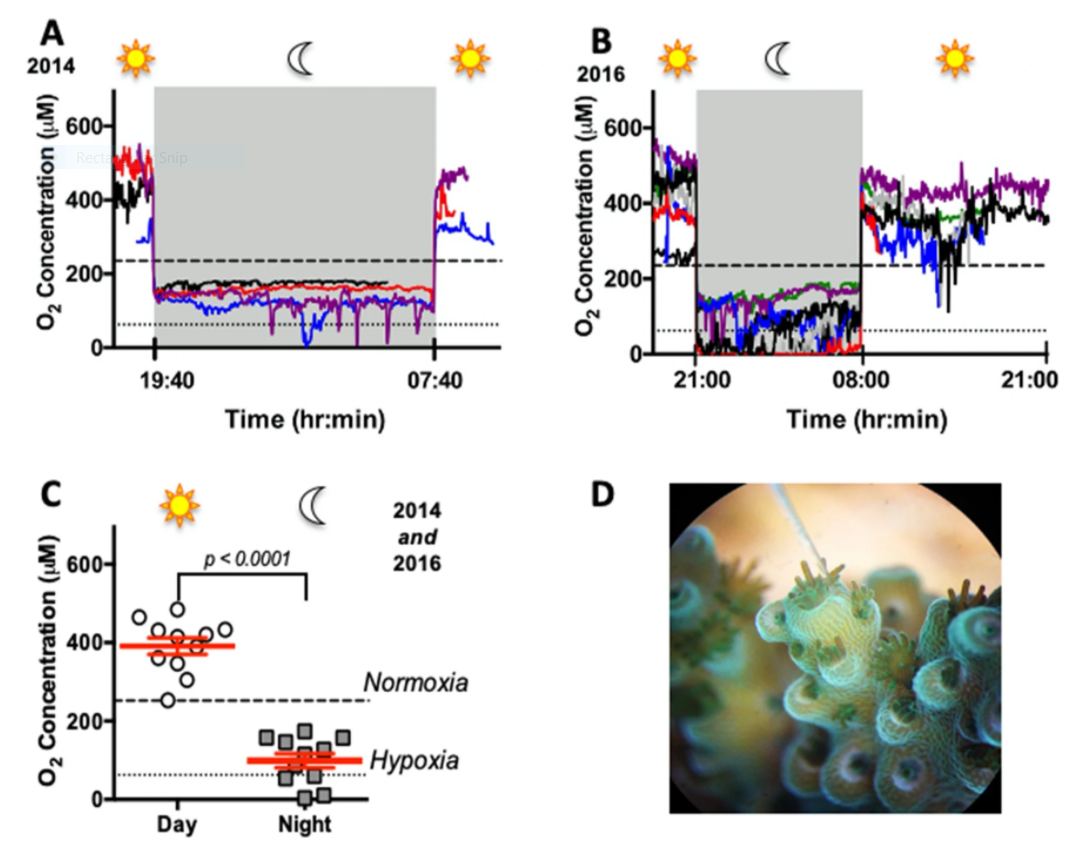 It’s been a few months since our last update and we’ve been busy! Namely, here are 4 new papers hot off the press:

This study examines the metabolic pathway utilization of  the coral Acropora yongei over a diel cycle. We determined that hyperoxic conditions persist in the coral diffusive boundary layer during the day and average hypoxic conditions are present during the night. We additionally identified strombine as corals’ main fermentative end-product, and strombine dehydrogenase as the main terminal dehydrogenase. Because these results align with the conclusions from a previous study on a species of brain coral, M. capitata, the importance of fermentation throughout day and night likely applies more broadly to reef-building corals.

Soluble adenylyl cyclase (sAC) is a bicarbonate-stimulated enzyme that produces the ubiquitous signaling molecule cAMP, and deemed an evolutionarily conserved acid–base sensor. Here, we identified sAC genes in various cartilaginous, ray-finned and lobe-finned fish species. Next, we focused on rainbow trout sAC (rtsAC) and identified 20 potential alternative spliced mRNAs coding for protein isoforms ranging in size from 28 to 186 kDa. Western blot and immunocytochemistry revealed high rtsAC expression in gill ion-transporting cells, hepatocytes, red blood cells, myocytes and cardiomyocytes. Analyses in the cell line RTgill-W1 suggested that some of the longer rtsAC isoforms may be preferentially localized in the nucleus, the Golgi apparatus and podosomes. These results indicate that sAC is poised to mediate multiple acid–base homeostatic responses in bony fishes, and provide cues about potential novel functions in mammals.

We tested in six fish species the hypothesis that elevated extracellular [HCO3−] protects spontaneous heart rate and cardiac force development from the known impairments that severe hypoxia and hypercapnic acidosis can induce. Hearts were exposed in vitro to either severe hypoxia (~3% of air saturation), or severe hypercapnic acidosis (either 7.5% CO2 or 15% CO2), which reduced heart rate (in six test species) and net force development (in three test species). During hypoxia, heart rate was restored by [HCO3−] in a dose-dependent fashion in lamprey, dogfish and eel (EC50=5, 25 and 30 mM, respectively), but not in sturgeon, zebrafish or founder. During hypercapnia, elevated [HCO3−] completely restored heart rate in dogfish, eel and sturgeon (EC50=5, 25 and 30 mM, respectively), had a partial effect in lamprey and zebrafish, and had no effect in founder. Elevated [HCO3−], however, had no significant effect on net force of electrically paced ventricular strips from dogfish, eel and founder during hypoxia and hypercapnia. Only in lamprey hearts did a specific soluble adenylyl cyclase (sAC) inhibitor, KH7, block the HCO3−-mediated rescue of heart rate during both hypoxia and hypercapnia, and was the only species where we conclusively demonstrated sAC activity was involved in the protective effects of HCO3− on cardiac function. Our results suggest a common HCO3−-dependent, sAC-dependent transduction pathway for heart rate recovery exists in cyclostomes and a HCO3−-dependent, sAC-independent pathway exists in other fish species.

Previously, we showed that the evolution of high acuity vision in fishes was directly
associated with their unique pH-sensitive hemoglobins that allow O2 to be delivered to the retina at PO2s more than ten-fold that of arterial blood. Here, we show strong evidence that vacuolar-type H+-ATPase and plasma-accessible carbonic anhydrase in the vascular structure supplying the retina act together to acidify the red blood cell leading to O2 secretion. In vivo data indicate that this pathway primarily affects the oxygenation of the inner retina involved in signal processing and transduction, and that the evolution of this pathway was tightly associated with the morphological expansion of the inner retina. We conclude that this mechanism for retinal oxygenation played a vital role in the adaptive evolution of vision in teleost fishes.

CO2-induced aquatic acidification is predicted to affect fish neuronal GABAA receptors leading to widespread behavioral alterations. However, the large variability in the magnitude and direction of behavioral responses suggests substantial species-specific CO2 threshold differences, life history and parental acclimation effects, experimental artifacts, or a combination of these factors. As an established model organism, zebrafish (Danio rerio) can be reared under stable conditions for multiple generations, which may help control for some of the variability observed in wild-caught fishes. Here, we used two standardized tests to investigate the effect of 1-week acclimatization to four pCO2 levels on zebrafish anxiety-like behavior, exploratory behavior, and locomotion. Fish acclimatized to 900 μatm CO2 demonstrated increased anxiety-like behavior compared to control fish (~480 μatm), however, the behavior of fish exposed to 2200 μatm CO2 was indistinguishable from that of controls. In addition, fish acclimatized to 4200 μatm CO2 had decreased anxiety-like behavior; i.e. the opposite response than the 900 μatm CO2 treatment. On the other hand, exploratory behavior did not differ among any of the pCO2 exposures that were tested. Thus, zebrafish behavioral responses to elevated pCO2 are not linear; with potential important implications for physiological, environmental, and aquatic acidification studies.